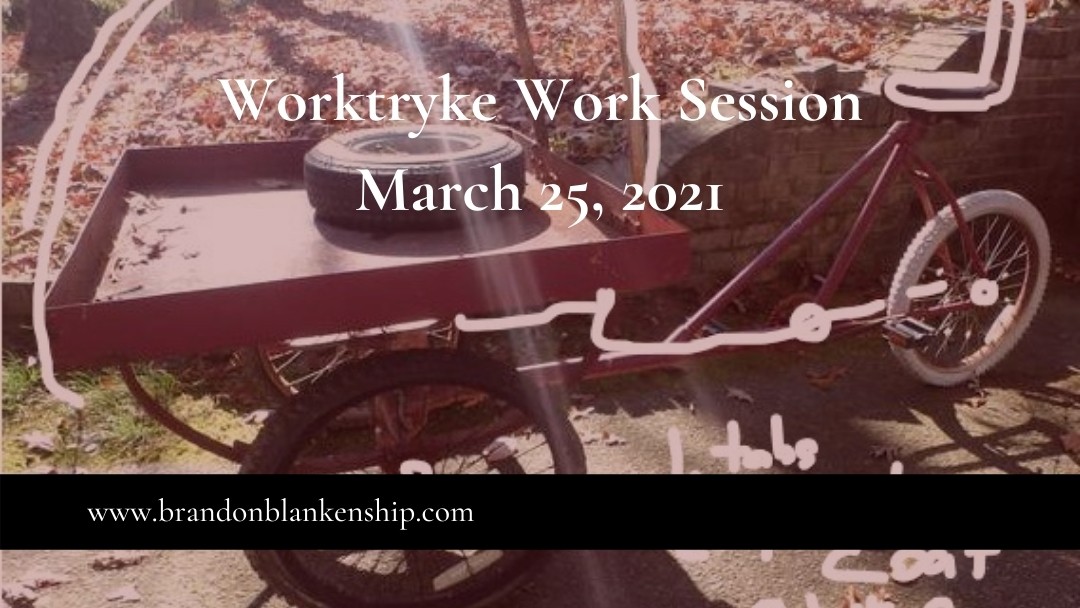 “D” at Redemptive Cycles was good enough to talk with me about what I am imagining for the Worksman Trike. I’m calling this experiment the “Worktryke.”

I understand that this trike was used in the Fairfield Still Works. This seems like a good experiment for Birmingham, Alabama. Take something from Birmingham’s past and modernize it for 2021. This trike certainly has good bones. It is officially a Worksman Model U tricycle manufactured by the Worksman Cycles Company, Inc. in Ozone Park, NY. This company is the oldest bicycle manufacturer in the United States.

Conceptually, I imagine several upgrades to make this trike more useable for use in the city (as opposed to in a covered still mill). The trike was designed to carry a lot of weight, slowly. It would be useful to carry weight, but for urban use the trike has to move faster and not trap rain in the front tray. Moving faster may mean better brakes. Here is a bullet list of possible upgrades

The next step seems to be to reach out to a metal fabricator and see what options there might be for adding tabs on the front and left right so that there would be a place to bolt the part of the disk brake that pinches the disk and slows the trike. 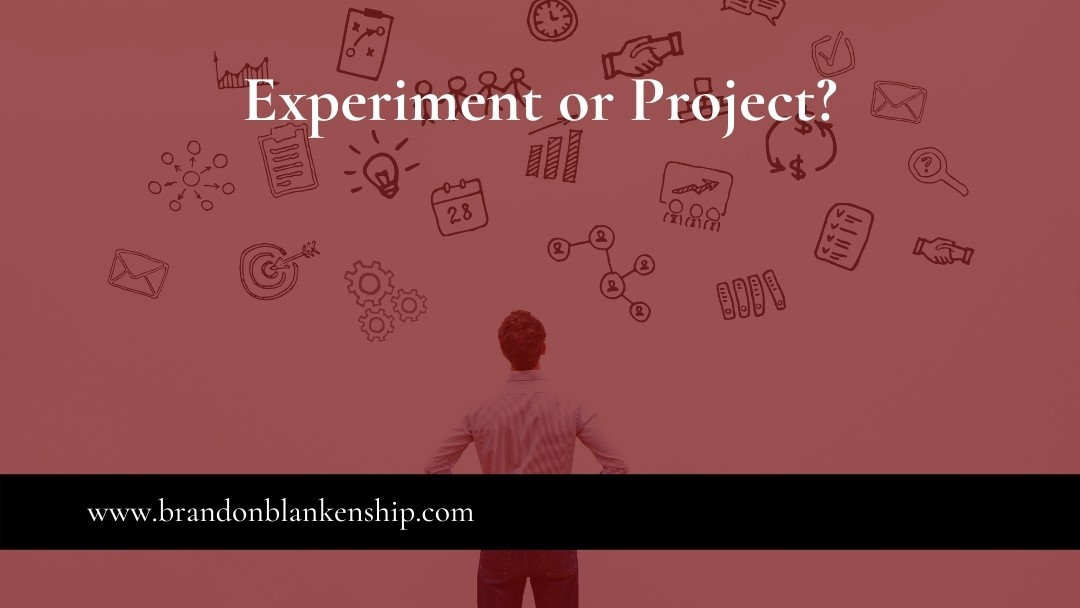 Today, I divide my work up into experiments and projects. I attribute this concept to Neville N. Medhora. I wish he had taught me sooner.

When I was growing up I was always puzzling on something – usually something way beyond my reach – to figure out. I took apart any electric or electronic device that I got my hands on. I wanted to know what was inside, what made them work. Sometimes, I got them back together. My dad called it piddling, which I heard to mean failure. Looking back, it was not failure at all. It was exerimenting and even when I couldn’t get something back together or make it work again, the expermient was not a failure. Nor was it pathetically trivial or trifling (the actual meaning of piddling). To some degree it was a success because the intention was to puzzle and learn and I did.

So, today I break my work up into experiments and projects. The intention and end of an experiment is to puzzle on something and learn.

Projects are different. Once I classify something as a project, the intention is a finished deliverable, by a deadline, under budget. Projects are the “get after it” portion of my life.

This differentiation has helped me because I can now experiement without the stress of a budget or a deadline. I am experimenting for the sake of learning. Sometimes I can just take something apart, see what makes it work, and not even try to put it back together. I’m learning.

But once I classify something as a project, it has to get done and it has to work.

For me, that is the difference between an experiment and a project. 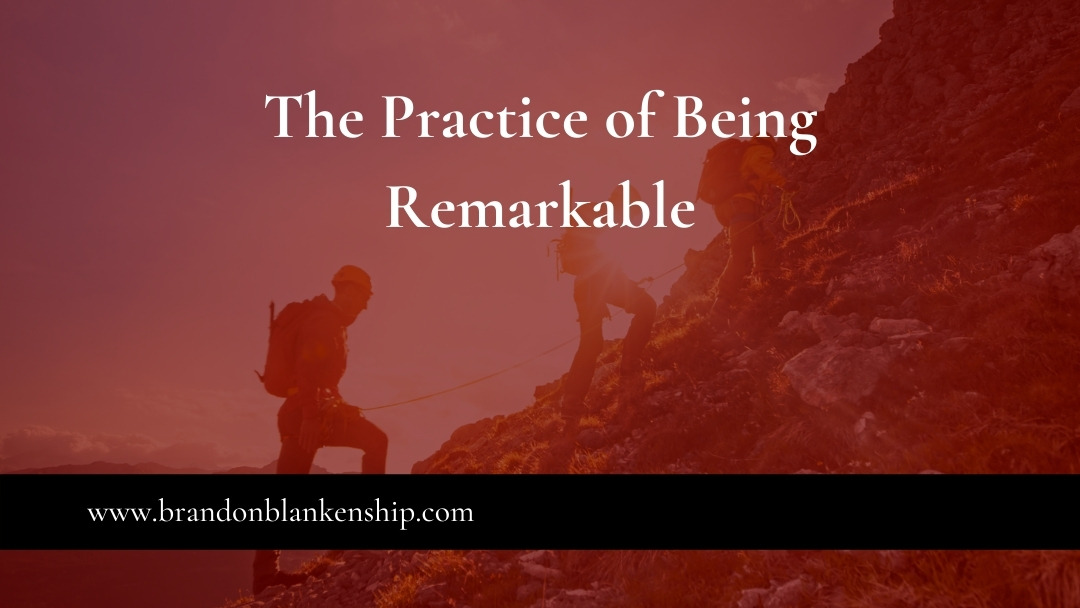 The Practice of Being Remarkable

When someone asks me if I know a lawyer who could help them with a particular issue, a list of particular lawyers usually run through my mind. Those lawyers are, to me, remarkable. That is, when asked, I remark about who they are or something they have done. This is a foundation for practice success.

The good news is that if you have not already started the process of being remarkable, you can start today. Whatever your role is in solving a problem is, be remarkable in that role.

One answer to this fear is the option of repositioning. Repositioning is an option when you determine that you are not (or are no longer) solving the problem you want to solve. A mid- or late-stage position change is not for the faint of heart. However, it’s a sign that you recognize a need for change in order to survive. Recognizing a need is one thing; acting on it demands spontaneity, audacity, perseverance, flexibility, patience and iron will.

Being remarkable enables differentiation, heightens recognition and leads to a well-defined brand that acts as a beacon for clients seeking particular expertise. 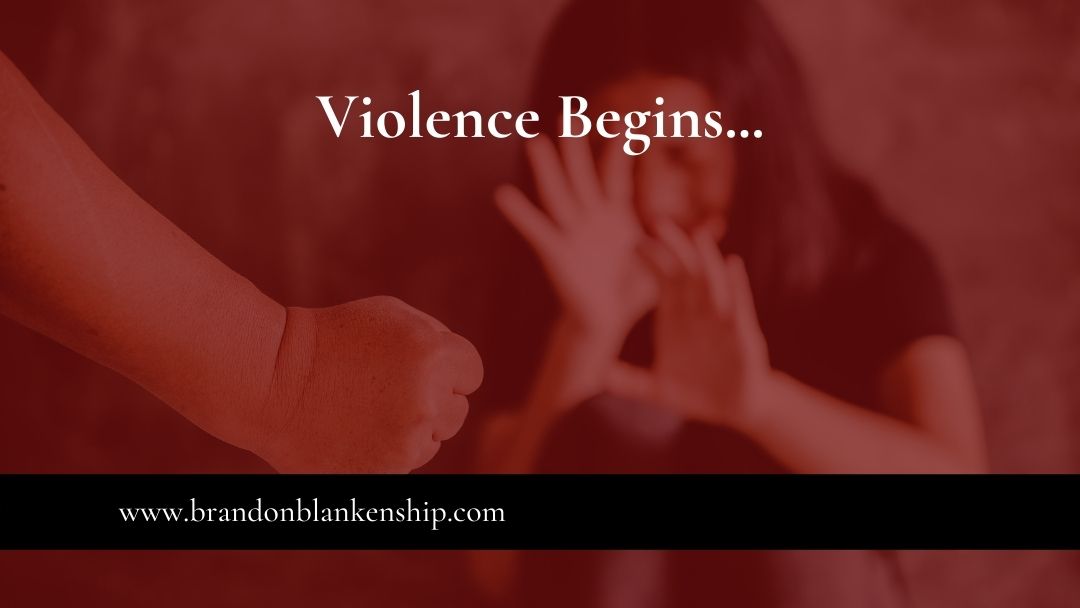 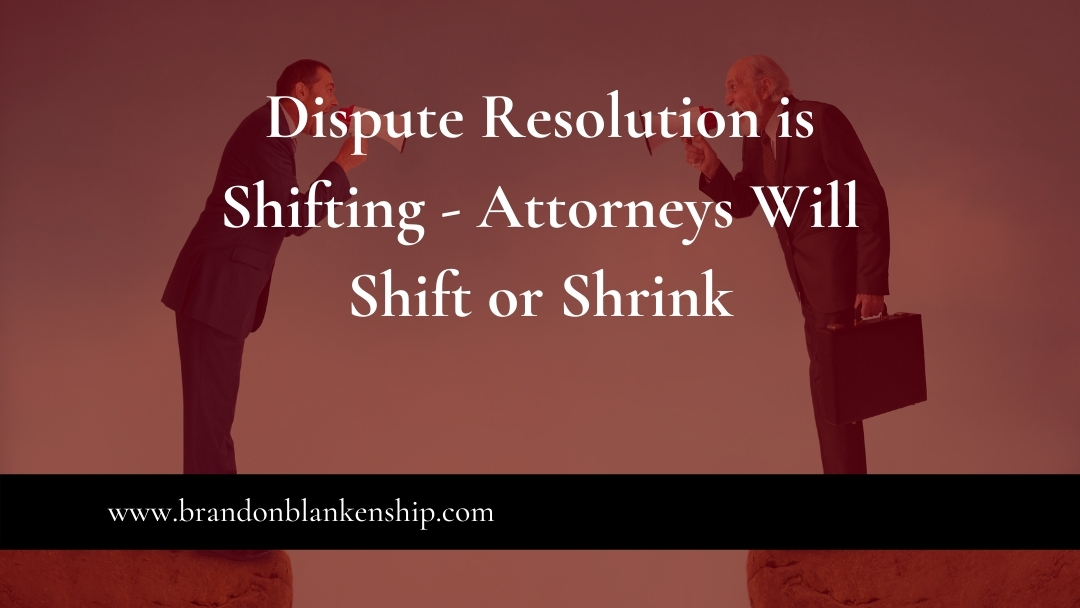 Dispute Resolution is Shifting – Attorneys Will Shift or Shrink

The Decentralized Arbitration and Mediation Network (“Network”) is a proposed global, borderless communication and transaction platform to resolve disputes globally. The Network would facilitate parties dispute resolution on its online platform. Not only is the Network scalable (it is more responsive to changes in the economy, environment, and such) it offers options that are not offered by courts such as

-> who will decide (with options of one person or algorithm, pools of random jurors, pools of experts, a collaboration of the parties, mediation, etc.);
-> how long the decision-making process will take;
-> party anonymity;
-> and whether the dispute and the resolution will be made public or remain private.

Most disputes have always been and still are resolved through private negotiation. One person claims they are owed something from another. A response is made, then a counter-response and this cycle continues until the dispute is resolved. Private judges have resolved disputes in the United States since at least 1866.1 Arbitration as a method of dispute resolution was formalized in the United States by the United States Arbitration Act (commonly referred to as the Federal Arbitration Act) in 1925. Mediation was practiced in Ancient Greece and it could be argued that every war between humans was followed by mediation of some sort.

Parties, including the government,2 may enter into a binding arbitration agreement to resolve a dispute in an alternative, private forum.

The Network will allow parties to resolve disputes whether they are local or global and unlike the jurisdiction of the local court, the resolution is enforceable globally. And perhaps more significantly, the Network does not require that parties, even legally created parties like corporations, be represented by attorneys.

Certainly, parties in dispute may rely on attorneys but the attorney role will be more of a consulting role rather than that of an expensive litigation role. Further, parties in dispute may be motivated to look for attorneys who have developed skills in areas that are not traditionally considered part of an attorneys stock and trade – such as crafting claims and defenses for resolution by algorithms rather than people.

Attorneys do not recognize this shift or deny it may be experiencing shrinking revenues. Attorneys, however, who shift and develop new skills to serve their clients may experience a revenue boom.