How to Investigate Yourself and Avoid the Invisible Gorilla 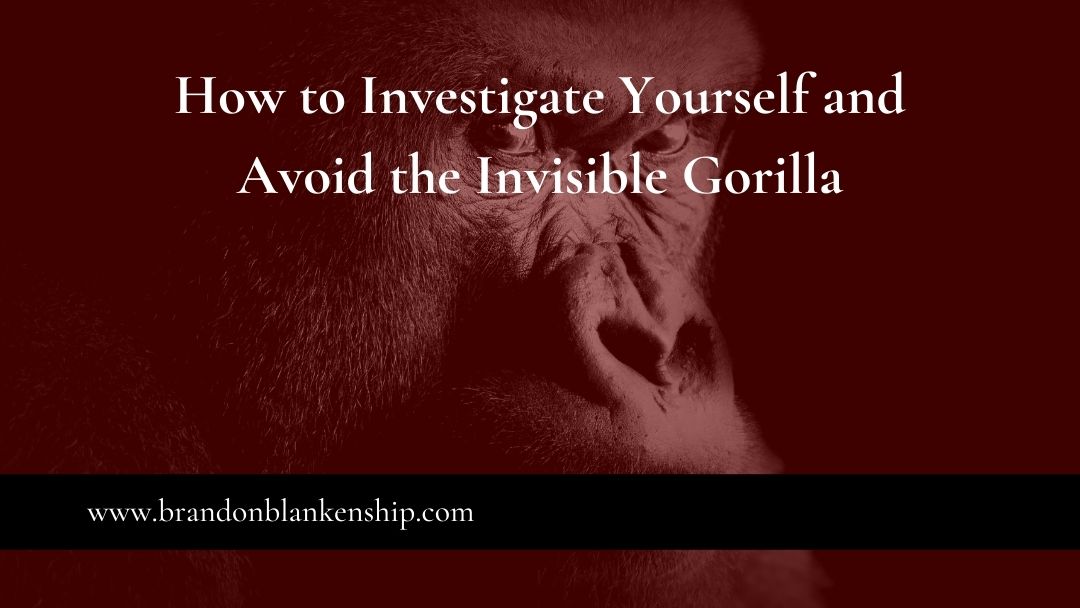 The nagging question for me is the same as it was four years ago, “how could all of that happen and I didn’t see it?” If there was an invisible gorilla, how did I not see it? The complete answer is a moderately sized book. Here, however, is one method you can use to avoid ever having to ask yourself this question. Further, although these facts are concentrated in a law firm, the principle works in most every area of life – business, dating, anywhere an invisible gorilla might sneak into your life.

The question could arise when, like me, a grievance or complaint is filed against your law firm. It was filed shotgun-style against every member of the firm. After meeting to share what facts we knew, we appointed one of our attorneys to conduct an internal investigation and draft a response.

What Is An Invisible Gorilla?

In the “… Invisible Gorilla Test,2 [a group of subjects were asked] to watch a short video of two groups of people (wearing black and white t-shirts) pass a basketball around. The subjects are told to either count the number of passes made by one of the teams or to keep count of bounce passes vs. aerial passes. In different versions of the video a woman walks through the scene … wearing a full gorilla suit. After watching the video the subjects are asked if they noticed anything out of the ordinary take place. In most groups, 50% of the subjects did not report seeing the gorilla…. The failure to perceive the [gorilla] is attributed to the failure to attend to it while engaged in the difficult task of counting the number of passes of the ball. These results indicate that the relationship between what is in one’s visual field and perception is based much more on attention than was previously thought.”3

An Invisible Gorilla in a Law Firm?

Notice that the test subjects’ failure to see a gorilla walk through the scene was not related to how obvious or outlandish the gorilla was. A bunch of people were passing basketballs and a gorilla walked through the scene, everybody saw that, right? Wrong! What was relevant was the level of attentiveness the subjects were giving to their assigned task – to count the number of passes. The more the subjects concentrated on their assigned task, the less they saw the gorilla in the scene.

A Particular Threat to Law Firms

Maybe not at first glance, but law firms may be particularly susceptible to invisible gorillas. My first mentor encouraged me to start my day as a lawyer as early as possible. His practice was to start the day sometime between 4:00 and 4:30 in the morning. He was convinced that the early morning hours were more productive and that he could give his full attention without distraction. I learned from him that the more undistracted attention I gave to a matter, the better service I provided for my client.

So, if you have several matters that you are responsible for and you are giving each one of them as much attention as they deserve, how many invisible gorillas might be lurking in your law practice? Doesn’t this research seem to indicate that the better service you provide your clients the more susceptible you are to invisible gorillas?

Consider using the method in other areas of your life. Where you may have thought that it was easy to split your attention across several things, reconsider. For example, if you read something that consumes your attention while you child is playing at the park, takes someone with you to help watch your child (or make your child the focus of your attention).