Is There a Hidden Enemy in the Lateral Hire? 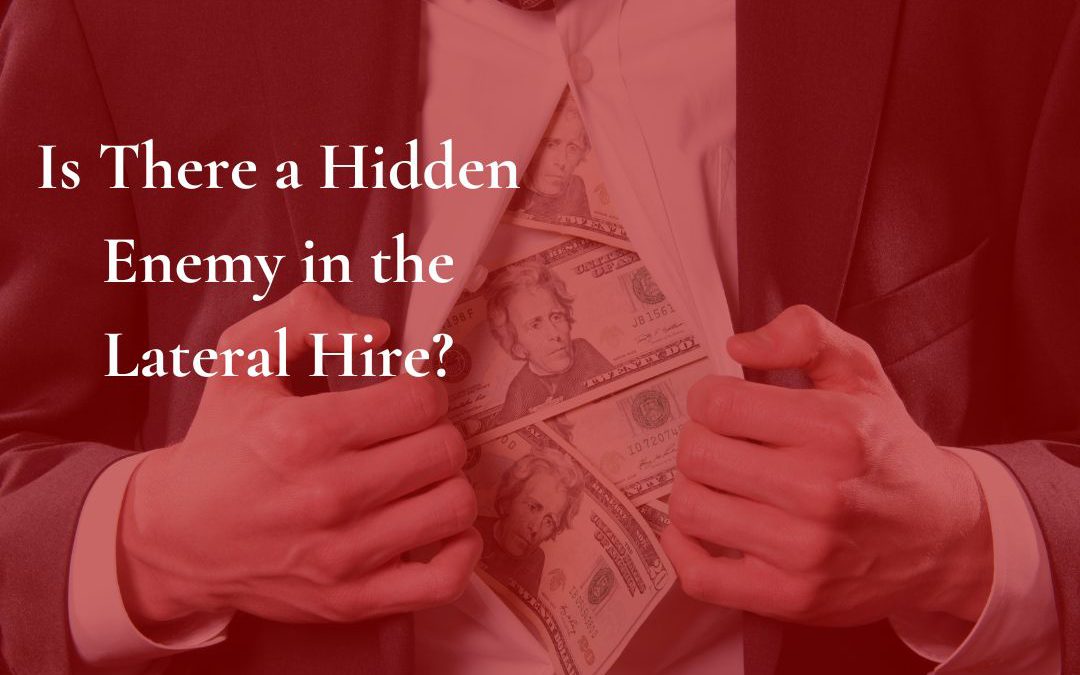 A lateral hire is attractive. They are already trained. They already have experience. They have already been vetted. Usually, the objective of hiring someone laterally is to fill an existing need in the firm or organization with as close of a match as possible, usually from outside the firm or organization. For me, it was an office administrator. I needed one. I had the opportunity to laterally hire one. I did.1

Since he came out of the exact position we were filling, we did not conduct any background checks or vet him in any way, we just hired him as an office administrator.

He was a good one too. He was a former state trooper who left law enforcement because he wanted to provide better for his wife and children. He was a faithful husband and father. He was an accomplished businessman. He was a loyal friend. Except he wasn’t. He wasn’t any of those things.

In fact, he was never a state trooper, he was a committed philanderer (with a penchant for Hooters2 girls) and his only notable attempt at being a business owner ended in personal bankruptcy. My lateral hire turned out to be a hidden enemy who stole millions of dollars from innocent people and drove a business that had been successful for over a decade into dissolution.

I did do a background investigation, but it was too late. It was after my hidden enemy was unmasked. Here are some things I learned that hopefully, you can use to avoid a similar situation. When hiring laterally, here is how you might avoid hiring a hidden enemy.

Do The Same Background Check On Everyone

If you do not have an established background investigation policy, make one. There are a multitude of options available online if you search “employee background investigation policy” in almost any search engine. Draft a working or “promising” policy and modify it until you find something that works for your firm or organization. For guidance on developing a “best” practice, see my post titled, Good Smart Promising or Best Practice?

Don’t Slack on Due Diligence

Do not slack on the due diligence just because someone vouched for the new hire. I’ve heard this phrase many times over years of hiring many people, “let me get you to fill these out – it’s just a formality.” Avoid the temptation to let your due diligence slip simply because you know the person or someone else who knows the person is vouching for them. Con artists, thieves, and cheats hate due diligence.

Look for What’s Not Obvious

I missed what a teenager probably would have seen instantly. When you looked at my hidden enemy’s Facebook3 page, it looked professional enough. He wasn’t dressed up like the Hamburglar. His page wasn’t linked to Ashley Madison.4 He looked like a young man aspiring to be a lawyer. It was what was missing that might have indicated a concern.

Now, these apparent inconsistencies would not have been a basis for hiring or not hiring anyone. What they might have done – in the course of due diligence during a background investigation – was raise questions that would have led to inconsistencies in his employment history. After hearing colorful stories about his days as a state trooper, the fact that he was never a state trooper might have halted the hiring process.

And today, I would even go a step further. I ask the applicant’s references if they would give me the names and phone numbers of other people who might know the applicant.

If you are in a new or growing organization, I get it – there are only so many hours in the day. One of the temptations of a lateral hire is that you get what you need, fast, without having to spend all the time required to background checks. Avoid the temptation. If you can’t squeeze in the time to call references, check employment dates with prior employers, etc., hire somebody to do it for you. It may seem expensive, but if you avoid a hidden enemy, it might be the best investment you could ever make.