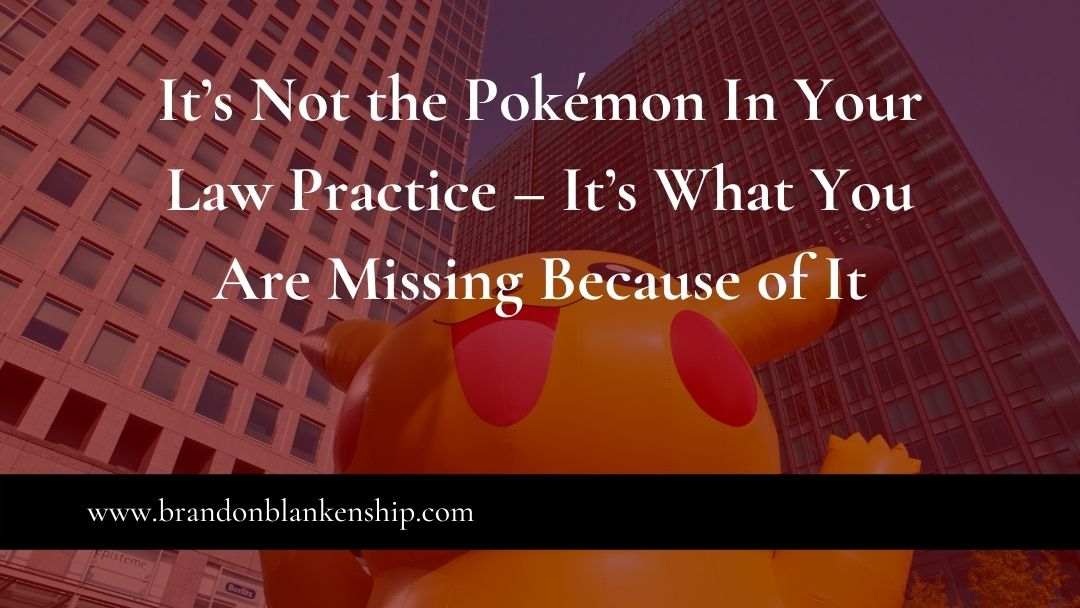 In case you haven’t noticed, across the United States, people are staring at their phones while walking through the streets in search of winged creatures. They are playing Pokémon Go and suffering everything from minor scrapes to catastrophic injury and death. Why are all these people playing Pokémon getting hurt? Are they stupid? Inattentive? Negligent? Grossly Negligent?

Nope. They are suffering from a phenomenon I’ve written about before – Inattentional Blindness.

Of course, there was the famous Invisible Gorilla Experiment that was conducted where observers who focused on basketball players didn’t see a man walk across the basketball court – in a gorilla suit.

That experiment was bizarre.1

And then came Pokémon – as if a social scientist’s wish was granted.

Hundreds of Pokémon players – across the United States – are walking in front of cars, falling in holes, bumping into each other and generally getting injured in every way imaginable.2 They are victims of Inattentional Blindness.

I couldn’t imagine a better way to illustrate that the more you focus on one thing, the less able you are to see everything else. That is inattentional blindness.

What Does That Have to Do With a Law Practice?

So what does that have to do with the practice of law? How about this? The more an attorney focuses on a client, a case, a transaction – anything – the less they are able to see everything else.

Establish Systems To Avoid Pokémon In Your Law Practice

Systems (such as policies, checks and balances and verification) are an effective way to ensure that inattentional blindness does’t injure you or your practice.

If you insist on playing Pokémon, a great system might be to always have a spotter so that you don’t step off into an open manhole. Hey, take turns so your spotter can play too.

If you insist on focusing on being the best attorney, a great system might be to make sure that similar systems are in place to ensure your clients, firm, and you don’t get injured as well.