One Way to Spot a Hidden Enemy 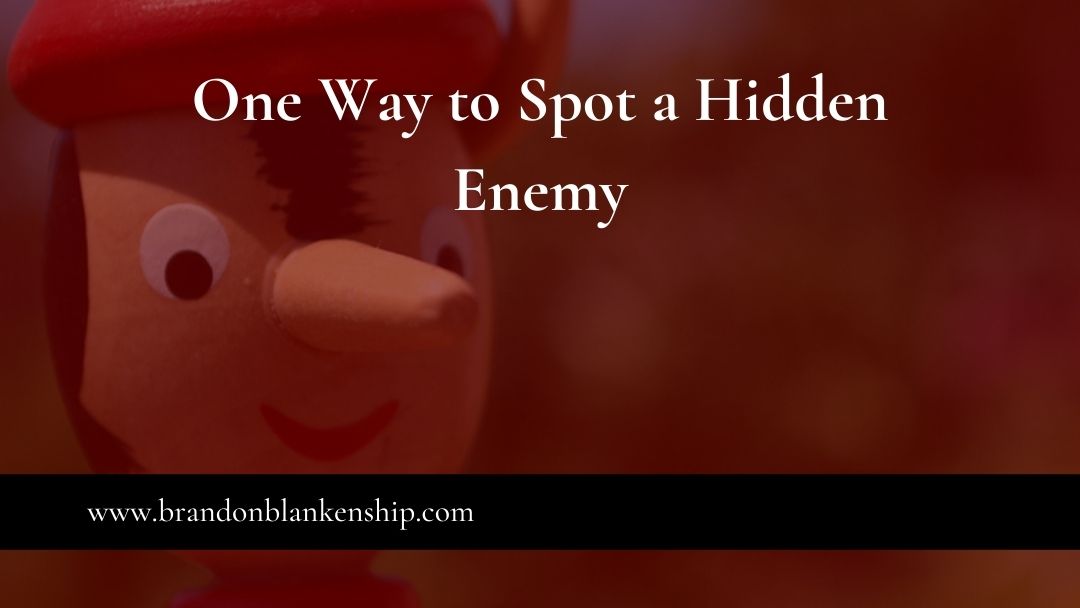 I’ve always felt pretty good about my ability to detect the liar. After all, it’s part of the process of how I made a living for many years. If I could prove that a witness was lying, it was a game-changer. If I sensed my opponent or her client was lying, it influenced my litigation strategy. If I sensed my client was lying, it influenced my client’s relationship (or lack of relationship). I’ve never had either admit they were lying, but I knew the liar. Or did I?1

One of the reasons that I felt so confident in identifying liars was simply life experience. I’ve been lied to a few times in the past. I remember what that experience was like and I work not to repeat it. Another reason I felt so confident was that I have studied it. As the science of lie detection has developed over the years, I took the continuing education classes and read the books. Imagine my surprise when I discovered that a trusted friend and employee had consistently lied to me for over five years a bunch of money, including my money. How could that be?

There are so many methods of detection: body language, eye movements, micro-facial expression, voice tone changes, and on and on. “According to one study, just 50 out of 20,000 people [using these methods] managed to make a correct judgment with more than 80% accuracy.”2 That is less than .25% accurate.

Diverse Human Behavior is the Challenge

The challenge is that human behavior varies widely and as populations become more diverse, behavior becomes more varied. Within a single family, reactions vary greatly. One child’s cheeks may blush when they are happy while another child’s cheeks may blush when lying. Body language and eye movements are strongly influenced by culture. For example, one culture may conclude that someone tells the truth because they “look you in the eye.” Contrastingly, another culture may never look others in the eye because it is considered impolite.

One Way to Spot A Hidden Enemy

One way to spot a liar is open-ended questions followed by listening. Research conducted to increase air travel security evidenced that asking open-ended (not yes/no) questions gave the interrogator an opportunity to listen to the answer and consider the credibility of the story itself. This method takes advantage of basic conversation skills to test credibility. For example, interrupting the story to ask for more details taxes the liar’s ability to create additional – credible facts. When appropriate, interrogators asked for the story to be repeated in reverse order – a request that liars struggle to complete.

The key is not to point out inconsistencies and contradictions but to let the liar continue to build his or her story on lie upon lie. Eventually, the liar becomes overwhelmed with the number of false facts he or she has to remember.

As the liar becomes overwhelmed look for three signs:

-The liar begins to contradict their own story.

-Where the liar was verbose they clam up.

-The liar becomes evasive or erratic. Or answers questions with questions.

Although this may seem like talking, it isn’t just talking. Interrogators trained in these techniques were “20 times more likely to detect [lying]”3 Interestingly, novices using this technique were almost as accurate as trained interrogators.

A Final Consideration In Detecting the Liar

One important element in all of the research, whether staged or real, is being open to the possibility that what you are being told may not be true. As long as you believe that there is no possibility that someone is lying to you, only the liar who makes the grossest mistakes will be detected. And hidden enemies don’t make gross mistakes.