The Risk of Certainty and How to Manage It 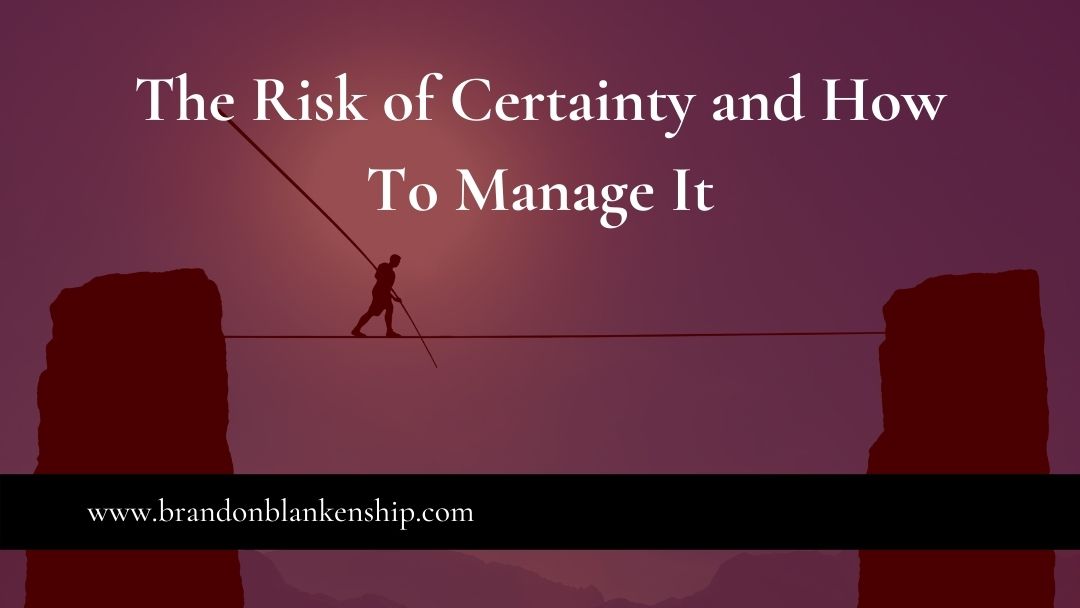 Even after evidence indicates we are wrong, we find it hard to change. Often it is because we are certain we are right. This risk of certainty is perhaps the most costly form of risk and the most manageable.1

Even after manufactures started admitting that their “knock-off” brand contained exactly the same ingredients, many people keep buying the more expensive option.

And I could go on and on.

One of the reasons we do this is that it works. Certainty makes life more efficient. We don’t have to stop and ask a lot of questions or read or do research with each step we take. Once something proves effective, we do it again. Once someone proves trustworthy, we trust them again.

But There Is A Turn

But people do stop smoking. People do change brands and people do embrace new technology. At some point, evidence overwhelms us to the point we change.

The risk arises when we are so certain that the evidence has to not just prove that something or someone is better. It has to be overwhelming enough to prove we are wrong.

And who does the evidence have to overwhelm? A judge? No. A jury? No. This evidence has to overwhelm the harshest trier of fact, us. It has to convince us that the new way is better AND that we are wrong to hold onto something or someone we are certain is right.

The distance between what the relevant evidence proves and what we are certain of is risk. It is in this space that competitive advantage is lost, betrayal matures, and cancer metastasizes.

Managing the Risk of Certainty

The way to manage the risk of certainty is to hold belief loosely. Be willing to be wrong. Rather than openly committing to a position that may one day prove incorrect, commit to a process of improvement. What does this look like?

It is the difference between saying, “I trust him implicitly” and reconciling your bank account.

It is the difference between certainty and occasional verifying, even in long-term relationships.

This is different than the risk of certainty that strikes when we are not anticipating it and are usually in the worst position to respond.

If risk is inevitable – and it is – it is best to trade the risk of certainty for a risk we can manage.