Three Ways to Have the Most Awesome Marriage Ever 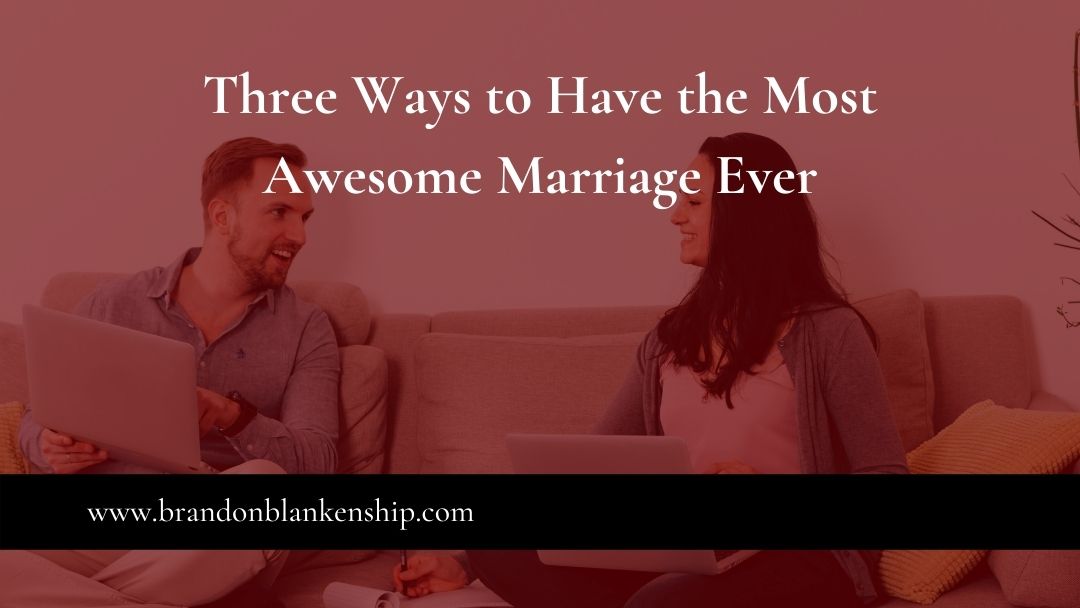 According to my wife, I work a lot. Mostly I agree with her. When we first married I worked in technology and it was common for me to work all day, all night, and all the next day. I have had a couch in my office for years because I discovered that I can sleep for 20 minutes and work another four hours productively. Later, the practice of law rewarded hard work. The more I worked, the better result I got for my clients.

To be fair, I did take time off. Over the years, we have taken vacations lasting from three days to a month. In fact, not too long ago I took a year-long sabbatical from working and teaching. Even then, my wife would tell you that I worked on “projects” the whole time.

No Formula for an Awesome Marriage

What I find remarkable is that our marriage today is better than it ever has been. We have been married for 27 years – and we dated eight years before we married. There have been times when I have been a sorry husband, and in spite of that, today we have an awesome marriage. It would be disingenuous for me to say that I had discovered a formula that you could follow for certain success. I haven’t. In fact, as my friends have suffered divorce over the years I am only certain of one thing: you are only married as long as your spouse wants to be.

Even so, during one of our dates, I asked my wife if there was anything – anything – that I got right over the years. Anything that I could share with others that might increase their chances of an awesome marriage. Here is her list:

“You go on dates with me often…”

This reminds me of a quote from Alabama’s most prolific movie star, Eugene Walter, “if you have $10, throw a $10 dinner party.” Walter never let mismatched silverware or paper plates stand in the way of a dinner party. The same is true for a date with your wife. If you have $10, have a $10 date.

Before we had children, this just happened naturally. Now, it requires intention. Decide what you are doing, pull out the calendar, write it down and stick to it. Honor this appointment more than you would honor an appointment with anyone else. In ten years, an appointment you rescheduled with a client will be forgotten. Not so with your spouse. And this date has other rules. To qualify as a date:

-it has to be just us;
-phones go in airplane mode;
-the conversation can be about anything except scheduling or logistics. Find some other time to schedule your time, budget and work out who will share which duties.

“You give me your undivided attention every day…”

Imagine the kid who holds his mother’s face in his hands so he can tell her something important.  Even if it is just a few minutes, I work to give my wife that level of attention, every day.

“You ask for forgiveness and forgive…”

All relationships are built on trial and error, mostly error. Everybody I have ever met I started off not knowing. I don’t know what I expect, and I don’t know what they expect. At some point, one of us makes a mistake. Whether the relationship continues to grow is based on our ability to forgive.

When Zig Ziglar was in his eighties (and had been married over sixty years) he was asked in an interview what the biggest argument was with his wife. He said, “sitting here today – I don’t remember a single argument I had with [my wife].” The interviewer scoffed, “after over sixty years of marriage you never had an argument?” Zig replied, “I didn’t say we didn’t have arguments – I said I don’t remember any of them.” That is the most awesome marriage ever.

When I first started practicing law, I would have heated courtroom arguments with the other side. When we finished, we would shake hands, go eat lunch or get a cup of coffee, or at least just hang out and talk a little while. Sometimes we would apologize right there about letting the argument get personal or pushing this or that – and then it was over. If forgiveness is so powerful at home, why wouldn’t it be in our profession?