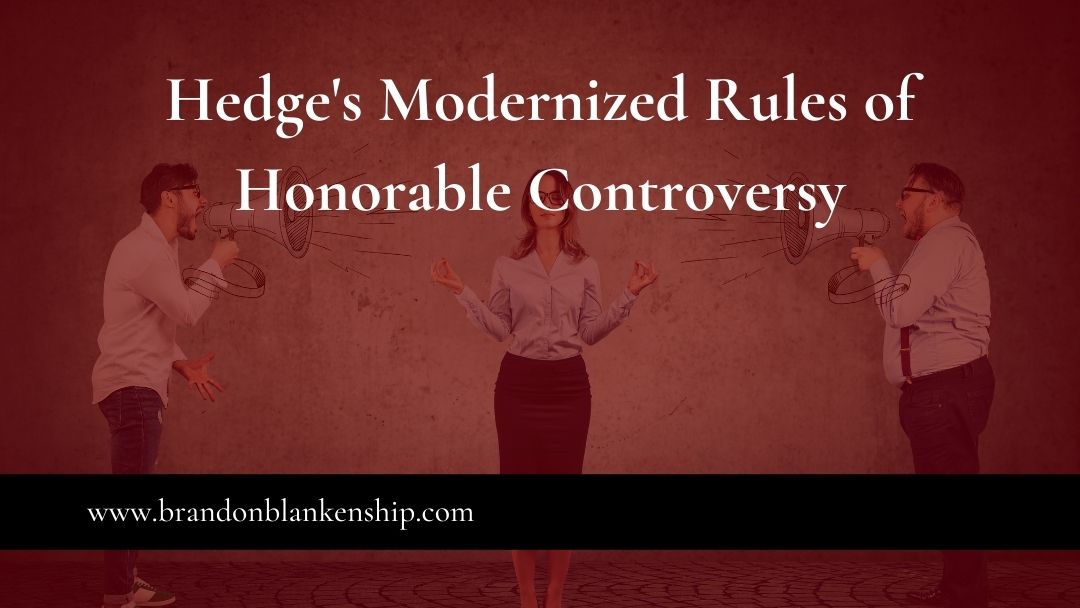 debate /dəˈbāt/ argue about a subject

Agree on the subject in controversy and the definitions of the terms used during the debate.

There should never be any misunderstanding about the subject in controversy. If misunderstanding arises, the debate will likely be less respectful and take a much longer time to resolve – this is because both parties will be on different pages, thinking they are on the same page.1

Each party should assume that the other parties in the debate stand on equal footing with respect to the subject in controversy. Assume that all parties possess equal talents, knowledge, and desire for truth and that it is possible, therefore, that each party, even themselves, may be in the wrong, and their adversaries in the right.

In the heat of controversy, people often forget how often they have been wrong in the past. Consider that there have been major developments in almost every subject that revealed that long-held beliefs were error. Holding onto those beliefs results in presumptions, confidence, and arrogant language; all of which obstruct the discovery of truth.

Avoid commenting on the personal character of an adversary.

Good people can do bad and bad people can do good. Personal character comments are not only useless with respect to the subject in controversy but can produce real evil… They indicate in the person who uses them a mind hostile to the truth; for they prevent even solid arguments from receiving the attention to which they are justly entitled.

No one has a right to accuse their adversary of hidden motives.

Arguments are to be answered, whether the person who offers them is sincere or not; especially as their insincerity, if real, could not be ascertained. To inquire into their motives, then, is useless. To accuse them of indirect motives is … wounding.

The results of any debate are not to be awarded to the person who maintains it unless they expressly own them.

If an absurd consequence is fairly deductible from any proof, it is rightly concluded that the proof itself is false; but it is not rightly concluded that the person who advances it, supports the absurd consequence. The charitable presumption, in such a case, would be that the person had never made the deduction. Assume that if the opponent had considered this result they would not have argued for it in the first place.2

As truth, and not victory, is the professed object of controversy, whatever proofs may be advanced, on either side, should be examined with fairness and candor; and any attempt to ensnare an adversary with false proofs, or to lessen the force of his reasoning, by wit, petty or unnecessary objections, or ridicule, is a violation of the rules of honorable controversy.

Neighbor, can we live with these rules?

I was originally introduced to these rules by Prof. Gerald Jones. The original (below) was discovered in the Encyclopedia of English Grammar: Designed For the Use of Schools, Academies and Private Learners by William Hall and printed by Scott & Bascom, Columbus, OH (1850).

Hedge acknowledged that because human knowledge is limited and that known and newly discovered knowledge may be “contemplated by different minds” through “different points if view” controversy is a tool to test knowledge. The risk of controversy is that it is “oftentimes conducted with such intemperate and misguided zeal, as to inflame animosities, by which the comfort and harmony of society are impaired.” Hedge’s 1850 writing is just as relevant today.

I would join Mr. Hedge in the position, however, that even with those societal risks, the value of properly conducted controversy is immeasurably good. I would lift it to another level — it is a national moral that makes the United States great. The structure of a three-branch government, yes. Sovereignty divided between the federal and state governments, yes. Powers reserved to the citizenry, yes. But the resulting tension resolved through controversy, civil discourse, it is a national moral.

It is a beautiful thing to encounter modern students, often classically educated, who can take a position and deploy rhetoric and authority to artfully, and honorably, defend it. The student and the observer benefits from the encounter.

It is an ugly thing to encounter disruption disguised as controversy. It is evil to deploy those same rhetorical skills to dehumanize or reduce people. It is evil to twist authority to win for the sole sake of victory rather than what is right or good. So, “it is incumbent on all who engage in [controversy], from whatever motives, to observe rigorously those laws and principles by which [evil] may be avoided and [good] secured. The following rules, sometimes called canons of controversy, have been highly approved by writers of learning and discernment:”3

If this is not done, the dispute is liable to be, in a great degree, verbal. Arguments will be misapplied, and the controversy protracted, because the parties engaged in it have different apprehensions of the question.

In the heat of controversy, men are apt to forget the numberless sources of error, which exist in every controverted subject, especially of theology and metaphysics. Hence arise presumptions, confidence, and arrogant language; all which obstruct the discovery of truth.

All expressions may be considered as unmeaning, which contribute nothing to the proof or the question; such as desultory remarks and declamatory expressions…

Personal reflections are not only destitute of effect, in respect to the question in discussion, but they are productive of real evil… They indicate in him, who uses them, a mind hostile to the truth; for they prevent even solid arguments from receiving the attention to which they are justly entitled.

Arguments are to be answered, whether he, who offers them, be sincere or not; especially as his want of sincerity, if real, could not be ascertained. To inquire into his motives, then, is useless. To ascribe indirect ones to him is … hurtful.

If an absurd consequence be fairly deductible from any doctrine, it is rightly concluded that the doctrine itself is false; but it is not rightly concluded that he who advances it, supports the absurd consequence. The charitable presumption, in such a case, would be, that he had never made the deduction; and that, if he had made it, he would have abandoned the original doctrine.

Brethren, can we live with the rules? 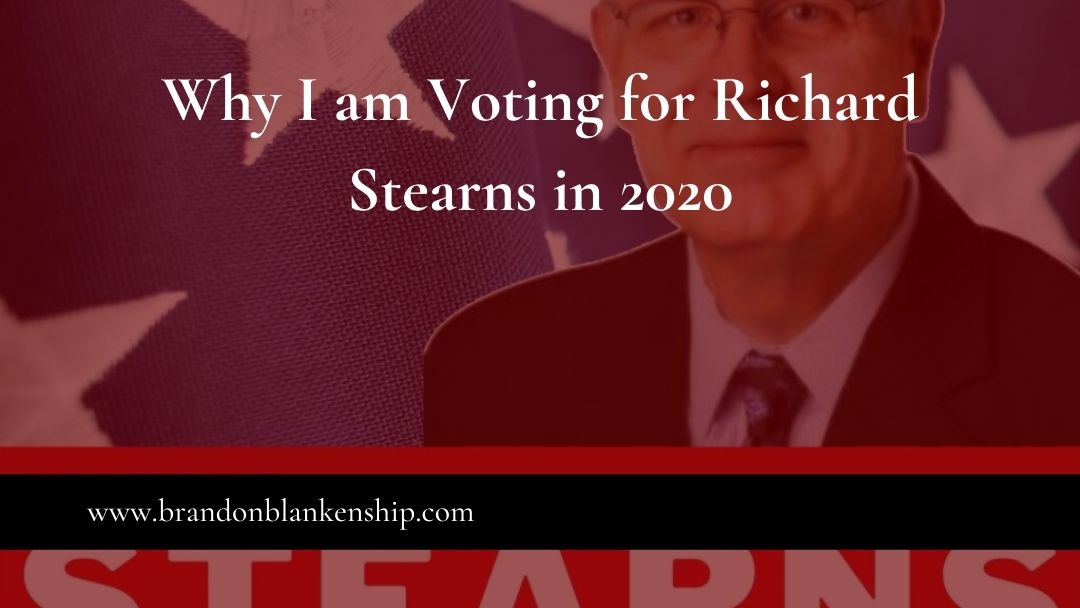 Why I am Voting for Richard Stearns for President in 2020

Every person is to be in subjection to the governing authorities. For there is no authority except from God, and those which exist are established by God. 2 Therefore whoever resists authority has opposed the ordinance of God; and they who have opposed will receive condemnation upon themselves. 3 For rulers are not a cause of fear for good behavior, but for evil. Do you want to have no fear of authority? Do what is good and you will have praise from the same; 4 for it is a minister of God to you for good. But if you do what is evil, be afraid; for it does not bear the sword for nothing; for it is a minister of God, an avenger who brings wrath on the one who practices evil. 5 Therefore it is necessary to be in subjection, not only because of wrath, but also for conscience’ sake. 6 For because of this you also pay taxes, for rulers are servants of God, devoting themselves to this very thing. 7 Render to all what is due them: tax to whom tax is due; custom to whom custom; fear to whom fear; honor to whom honor. Romans 13: 1-7 NASB

This instruction would be simple (although not necessarily easy) to follow under the authority of a king or dictator. Whatever the King commanded, the Christian would be subject to unless it contradicted a command from God. In a democracy or republic, where the citizens themselves participate in authority, participation in the government becomes complex.

St. Paul would have been writing this around 57 AD when Rome was established as a republic. The members of the senate, which governed and advised, was aristocratic and not elected. There was a strong divide between the wealthy class and the poor class. The wealthy class controlled most of the power and the poor class dissented and eventually earned the power of the veto. By 57 AD, the Roman was contending with a power struggle with emperors.

Assuming that Christians have a duty to vote, how do they pick a candidate?

Here are the reasons why I plan to write-in Richard Stearns in 2020 for president of the United States: